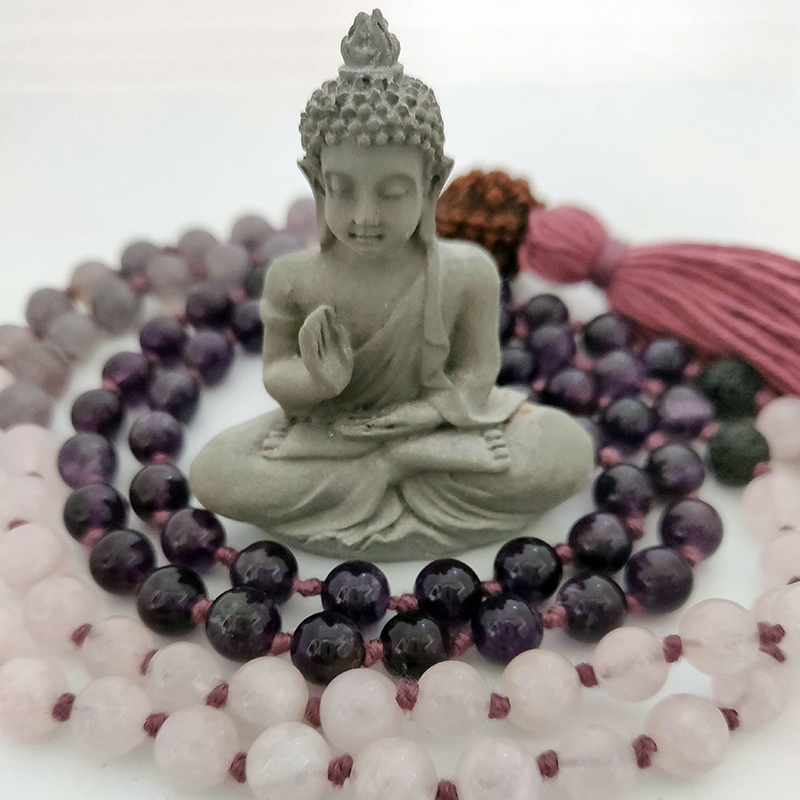 A mala is simply a string of beads that are used in a meditation practice. It is a tool to help you count mantras, and acts as a tactile guide as you sit in silence. Malas can be made of many materials — I only use authentic gemstones, rudraksha seeds and sandalwood.

I hand knot every mala I make and chant a Mantra on each mala as I hand knot it. These mala beads can be customised with specific crystals and mantras based on each individual person, please contact me here for us to have a bespoke consultation and we can create your own beautiful mala.

Want to find out more about Mala beads?

Order a piece uniquely designed for your requirements! If you’d like to chat about what you would like – get in touch!

Schedule a chat
Send a message
See my full collection

History of a Mala

Mala beads have been used by yogis and spiritual seekers for thousands of years to help keep their minds focused during meditation. Malas were first created in India 3000 years ago (with roots in Hinduism & Buddhism) and were used for a special style of meditation called Japa, which means, “to recite”. The term ‘mala’ is a Sanskrit word for “meditation garland.”

The tassel’s significance has multiple meanings. One that resonates with me is that as the strings come together as one to form the tassel, it represents our connection to the divine and to each other. We love the concept of it representing oneness.

The Guru (teacher) Bead is the bead that the tassel attaches directly to. When strung on a necklace, the Guru Bead is often the 109th necklace. The Guru Bead is said to symbolize the Guru from who the student has received a mantra being used or recited and pay homage to the student-guru relationship.

A true sign of a traditionally crafted mala, knotting not only makes the mala stronger, it also provides the perfect space for Japa Meditation – a meditation that uses each bead to count a repetition of a mantra.